City stumble at home in the Premier League for the first time sine Nov 2010. 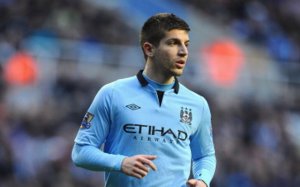 No major alarms for the England international shot stopper, and in actual fact a number of impressive saves to keep his side in the game at just 1-0 down.

An impressive start to the match with his constant raids down Chelsea’s left flank, however, as the visitors grew more into proceedings, so the Argentinian’s focus switch more from attack to defence, and his game became alarmingly ragged as a consequence.

The Belgium international was his usual assured self for most of the match, although there were moments when even the ice-cool City skipper lost his rag as wave after wave of Chelsea’s attacks rained down on the home team’s overwhelmed back four.

At times the young Serbian looked out of his depth trying to keep up with the speed of the visiting team’s counterattacks, and the 20-year-old’s wobbly display at the heart of the north-west outfit’s defence was just one of a number of worries on the night for City coach Manuel Pellegrini.

City’s most penetrating player in the opening 20 minutes of the contest when the hosts were well on top, with the Serb creating a number of half chances with his constant over-lapping runs down the left flank and wicked delivery, although the marauding left back’s influence after the break waned.