Just who are the top-flight midfielders who have attempted the most amount of passes per game so far this season? Well, we will reveal their identity here … 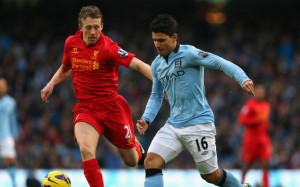 The Reds’ Brazilian water carrier is one of head coach Brendan Rodgers’s most important players at the moment, with the experienced holding midfielder’s main job being to sit in front of his back four, break up opposition attacks and then find his own team-mates with the ball.