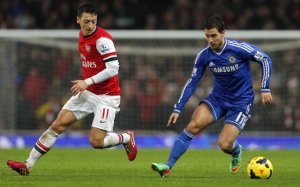 Chelsea playmaker Eden Hazard has admitted that he is “flattered” to be linked with Ligue 1 champions Paris Saint-Germain, before going on to confirm that he has no intention of quitting Stamford Bridge for the Parc des Princes next season.

Arsenal are keen on signing Wolfsburg’s attacking midfielder Maximilian Arnold, however, the north London club will need to beat off competition from Serie A champions Juventus if they are to sign the Germany Under-21 international this summer.

Highly rated Juventus midfielder Arturo Vidal, who is wanted by Manchester United, has put pen to paper on a new bumper £200,000-er-week contract that ties the Chile international to the Old Lady of Italian Football until 2018.