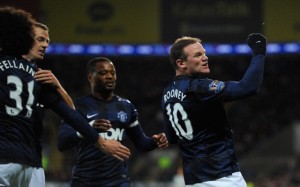 Manchester United striker Wayne Rooney has agreed a new £70m contract that will see the England international end his career at Old Trafford, while also making the 28-year-old the highest paid player in the history of the Premier League.

Manchester United left-back Patrice Evra has triggered a release clause in his contract at the Theatre of Dreams that has forced the Premier League champions to offer the experienced Frenchman a new deal in the north west.

West Ham United playmaker Ravel Morrison is desperate to quit the east London club after feeling under pressure from both manager Sam Allardyce and captain Kevin Nolan to sign on with a well-known football agent.

Fulham are adamant that head coach Rene Meulensteen has not been sacked by the west London club, despite former Bayern Munich manager Felix Magath being appointed to replace the Dutchman in the Craven Cottage dugout on Friday.

However, the struggling Cottagers players are not going to enjoy working under the German according to Bayern president Uli Hoeness, who claims that Magath goes beyond the limit of physical challenges with his players.