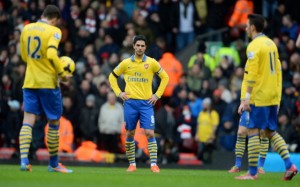 How Arsenal missed the influential and hard-working defensive midfielder recently while he was out through suspension, although he will need to be alert against the counterattacking Black Cats on Saturday afternoon.

The cultured Spaniard is set to come straight back into the Arsenal starting lineup for the visit of Gus Poyet’s relegation-threatened outfit this weekend after missing his side’s 2-0 loss to Bayern in the Champions League in midweek through suspension.

The England international has been Arsenal’s best player ever since he finally returned from a long layoff with a knee injury last month, with his space and eye for goal proving vital in the club’s push for honours.

The diminutive Spain international was given the hook in the first half against Bayern on Wednesday night following the dismissal of  Szczesny in what was a purely tactical move by manager Arsene Wenger, but at least the wide man will now be fresh for the match with Sunderland.