Run down the history of England’s penalty heartaches, here.

After Roy Hodgson admitted that he is considering brining a psychologist to the World Cup to help England prepare for a potential penalty shoot-out, we’ve taken a look at England’s blotted history from 12 yards out…

Lost to Germany in the semi-finals

The first of many shoot-out heartbreaks for the Three Lions…

After battling to a 1-1 draw with their arch-rivals Germany, England embarked on their first ever penalty shoot-out.

With the World Cup final looming, Stuart Pearce hit a feeble effort straight against the German keeper’s legs, before Chris Waddle blasted way over the bar to confirm the defeat. The Germans slotted every penalty. 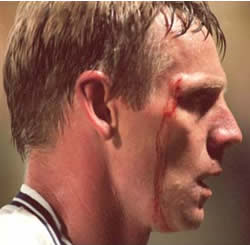