West Ham manager ‘Big’ Sam Allardyce is not known for his modesty but we weren’t aware of quite how highly the 59-year-old thinks of himself.

One Football365 reader revealed he met the Hammers gaffer at a London restaurant, where the big man was unsurprisingly enjoying a hefty feed.

Allardyce reportedly “lifted up his black fleece and much to the amusement of his family, he was wearing a t-shirt which said ‘In Big Sam We Trust’.”

The reader very handily including an image of the t-shirt in question, although regrettably it is not stretched over Allardyce’s not inconsiderable gut: 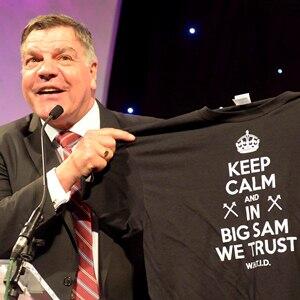