The rankings here are courtesy of WhoScored, a football statistics aggregator who rate a player’s performances judged by their overall contribution to a match.

Our criteria for ‘youngster’ is aged 21 or under, so the likes of Neymar and James Rodriguez narrowly miss out!

In at 10, is Liverpool’s prodigal English winger…

The 19-year-old flyer stars in a three-pronged Liverpool attack with Luis Suarez and Daniel Sturridge, and provides the side with genuine width and directness down the right. He’s improving every week, and has scored five and assisted three goals this term. He’s also the favourite to replace the injured Theo Walcott at next summer’s World Cup. 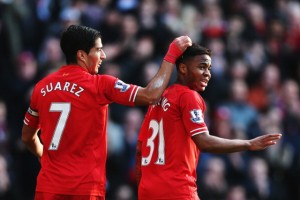