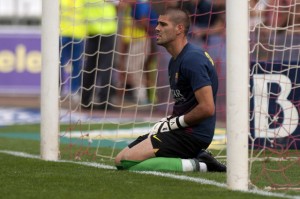 Liverpool are now the new favourites to land experienced FC Barcelona goalkeeper Victor Valdes at the end of the season.

Tottenham Hotspur keeper Hugo Lloris is being monitored by big-spending Ligue 1 champions Paris Saint-Germain for an end-of-season move to the Parc des Princes.

Atletico de Madrid’s president has confirmed that the La Liga outfit will not allow star striker Diego Costa to leave the Vincente Calderon this summer.

On-loan Hamburg centre-back Johan Djourou says that he would like to leave Arsenal on a permanent basis at the end of the season and sign for Bundesliga strugglers.

FC Barcelona are planning on making a move for long-time Manchester City and Manchester United center-back target Eliaquim Mangala at the end of the season.