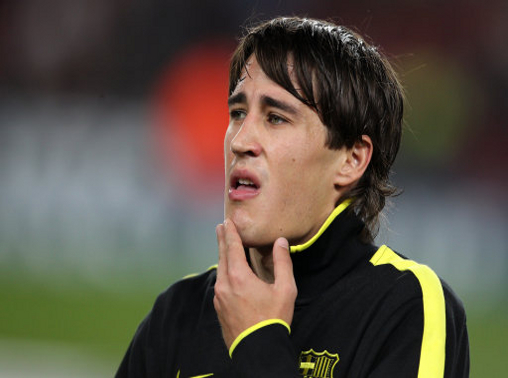 Reds have been scouting young Spaniard of late.

Liverpool are said to weighing up making an audacious cut-price move for FC Barcelona front man Bojan Krkic at the end of the season, according to reports in the Daily Mirror.

The former Spain international is currently spending a season-long loan spell with Eredivisie champions Ajax, however, it is still expected that the 23-year-old will return to Camp Nou when his loan spell comes to an end this summer.

However, Reds head coach Brendan Rodgers is known to have sent his scouts over to the Dutch capital to watch Krkic in action on several occasions already so far in this campaign, the last of which was for last Thursday night’s Uefa Europa League round-of-32 clash with Austrian outfit Red Bull Salzburg at the Amsterdam Arena.

And with the player himself recently admitting that he is unsure where his future lies, Rodgers and the Merseysiders are expected to make their move for the forward this summer.

“We’ll see about my future, there are still two months of the season to go before any decisions have to be made,” said Krkic.

Krkic, who signed for AS Roma in 2011 for a deal that could potentially have cost the Serie A side £35m, has a contract with Barca that runs until 2015.