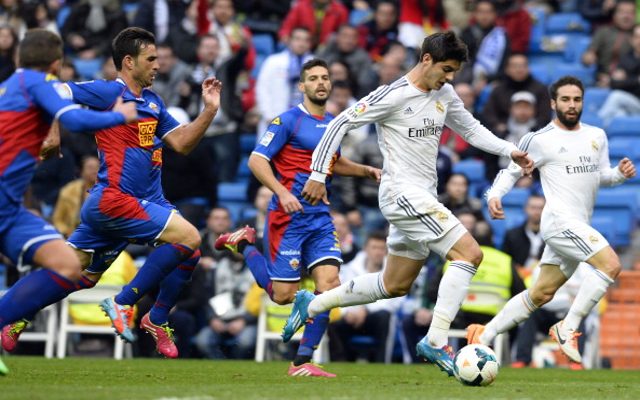 Real Madrid striker Alvaro Morata has reportedly agreed a bumper deal offered by Arsenal according to the Metro.

The talented young Bernabeu ace is said to have accepted terms on a five year deal worth £100k a week with the North London club willing to pay the La Liga giants £15m for the 21 year old Spanish forward.

Morata has represented Real Madrid since the age of 16 and is considered one of the hottest young talents in European football but his chances in Carlo Ancelotti’s first team set-up are limited to say the least.

However whilst the locally born forward would perhaps expect to be behind the club’s experienced talents in the Bernabeu pecking order he may be less accepting of the fact that fellow youngster Jese Rodriguez is getting far more of a look in under the Italian boss.

Alvaro Morata has made just one La Liga start this season whilst Jese has featured four times, as well as making a dozen appearances from the bench, this could be the reason the Real Madrid forward would be ready to consider a move to the Emirates Stadium.

Arsenal could well do with strengthening their attack and a move for Morata would not only help in that regard but would also adhere to Arsene Wenger’s youthful transfer policy.

The North London club have been overly reliant on exhausted French international Olivier Giroud and with both Lukas Podolski and Theo Walcott suffering with injury concerns during the campaign there is all the more reason to bring in some fresh legs.

Morata made his debut for Real Madrid back in December 2010 but has made just six La Liga starts since then but has managed to net a total of five goals for the club and has scored an impressive 12 goals in 11 appearances for the Spanish Under 21 side.