The Frenchman has been linked with a shock £5m move to Bayern Munich in recent weeks, and Toon boss Alan Pardew will be desperate not to lose another one of his key players this summer.

The Frenchman spearheads Arsenal’s side impressively. Even when he’s not scoring, he still influences matches, as his seven assists prove. 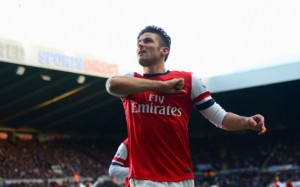