Well, you can’t blame a man for trying…

Following Liverpool owner JW Henry’s admission that Luis Suarez did have a £40m release clause, an Arsenal fan has started a petition hoping the FA will force the Reds do the following: 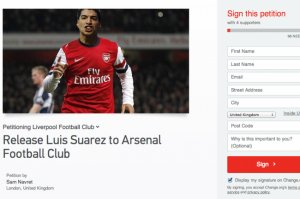 Despite the obvious tongue in cheek nature of the report, #FreeSuarez has begun to trend on Twitter today, with Liverpool fans taking a particularly dim view of the news…

First the umlauts on the twitter handles,#songforozil and now #freeSuarez , starting to wonder if Arsenal fans should be euthanized, so sad

Just got in to see this #FreeSuarez nonsense. I’m not even going to talk about it because it is exactly that, nonsense.

#FreeSuarez from the club that he willingly commited his long term future to.

From this moment, I’m afraid I can’t show any affection towards Arsenal on here ever again. I can’t be paired with the likes of #FreeSuarez.

Arsenal fans seem to going into overdrive by tweeting #FreeSuarez. What exactly does he need freeing from? Answers on a postcard #LFC #AFC