Sturridge and Agger set for intriguing face off…

In what could be an extremely interesting battle, Liverpool teammates Sturridge and Agger are likely to face each other at Wembley on Wednesday night.

While Sturridge has been on fire in the Premier League, scoring 18 goals in just 17 starts, the Danish centre-back has had a nightmare of a season – struggling with injuries and poor form.

For their international sides though, Sturridge is a rookie, and Agger is the Denmark captain – and will surely be keen on heading back to Melwood (Liverpool’s training rights) with the bragging rights. 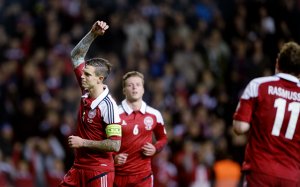