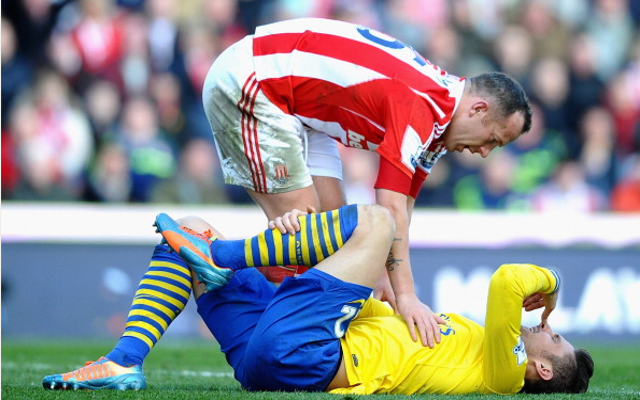 Potters star banned for incident at the Britannia Stadium.

Charlie Adam has been banned for three matches for stamping on Arsenal’s Olivier Giroud in last Saturday’s Premier League match at the Britannia Stadium.

The Scotland international was not punished by referee Mike Jones in the 1-0 home win but the incident was picked by TV cameras.

Stoke “vigorously appealed” the FA’s decision to punish the 28-year-old midfielder but an independent panel has upheld the ruling against Adam.

“Stoke City’s Charlie Adam will serve a three-match suspension with immediate effect after an FA charge for violent conduct was found proven,” said an FA statement.

“The incident with Arsenal’s Olivier Giroud, which was not seen by the match officials but caught on video, occurred during the fixture between the two sides at the Britannia Stadium on Saturday 1 March 2014.

“Adam had denied the charge, but it was found proven at an Independent Regulatory Commission hearing today (Wednesday 5 March 2014).”

The Potters have been left unimpressed with the ruling, which will see Adam miss the matches against Norwich, West Ham and Aston Villa, all of whom are within two points of Mark Hughes’ side:

Stoke chief executive Tony Scholes on Adam ban: “Not surprised because clubs like ours very rarely succeed in appeals to the FA.”