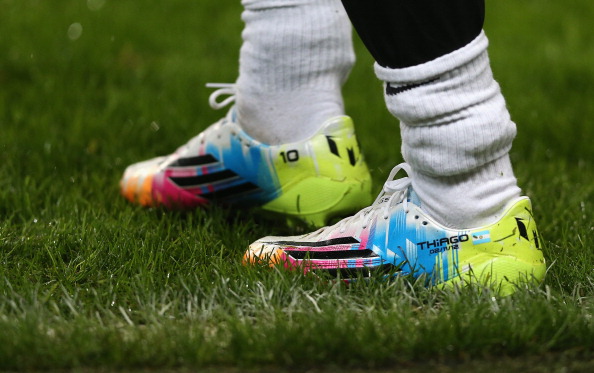 Both brands are set to go head to head ahead of Brazil 2014.

World famous brands Nike and adidas have already begun their battle ahead of this summer’s Fifa World Cup in Brazil.

And Nike have even go so far as claiming that  “football will never be the same again” as the contest between the two heavyweights really starts to hot up.

And it was German manufacturing giants adidas who managed to get in an early blow on their American rivals by unveiling their own all-in-one boot and sock primeknit boot.

On Thursday, the Germans revealed their limited edition Primeknit FS, which will come in a black, white and red design and is the world’s first all-in-one knitted football boot and sock hybrid.

And after the launch, Senior VP for Global Football at adidas, Markus Baumann, said: “Following the launch last week of the adidas Samba Primeknit, the world’s first knitted football boot, we’re excited to be able to give the World a glimpse into the future of our products.

“The introduction of the adidas Primeknit FS is only the latest chapter of adidas football products and further cements our place as the pioneer of footballing innovation.”

Meanwhile, Nike are keeping details of the launch of their own Magista boot closely under wraps, although Atletico Madrid midfielder Arda Turan has described the new boot as “futuristic” and Liverpool centre-back Mamadou Sakho called them “a true revolution”.