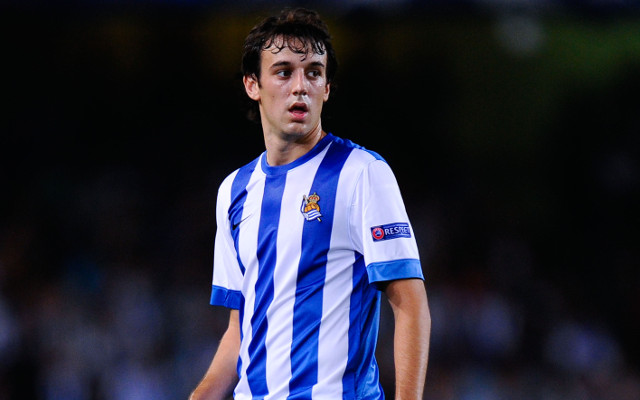 Manchester United could sign their first central midfielder since Owen Hargreaves arrived at Old Trafford in summer 2007 with move for La Liga ace.

CaughtOffside understands that Manchester United are monitoring the progress of Real Sociedad midfielder Ruben Pardo, who has been hailed as the new Xabi Alonso.

The 21 year-old has scored two goals and provided five assists in his 16 La Liga starts this season, dictating play from the middle of the park.

Pardo started against Manchester United in the UEFA Champions League group stage match at the Anoeta earlier this season, completing more passes than any other player on the Real Sociedad team even though he was substituted with a quarter of the game remaining.

One factor in Pardo’s play which may prove influential to David Moyes is his strong link up play with his team’s full backs.

Pardo is intelligent enough in his positioning that when he plays the ball into the channels for a wing back to run onto, he covers the space behind.

It is something that has been utilised heavily at Everton, with Steven Pienaar helping out Leighton Baines under David Moyes at Goodison Park last season.

This term Gareth Barry performs an even better job with Pienaar encouraged to play on the left of attacking midfield rather than on the wing of a four, and Barry’s role could be something for Pardo to emulate in Manchester United’s 4-2-3-1 formation.

After the two sides met in November, the 21 year-old Pardo waxed lyrical about Red Devils stalwart Ryan Giggs – who at 40 years-old is almost double the Spaniard’s age.

“Ryan Giggs showed he is still at the top, top level,” said Pardo to UEFA.com.

“What a fantastic player. For me he is an absolute star.

“Look at his age and how he can still perform at this level.”

After this season they could be team-mates.