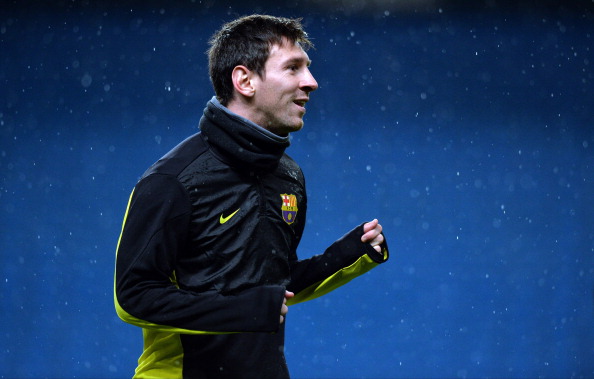 Chilean laughs off rumours linking club with the Argentinian.

Manchester City head coach Manuel Pellegrini has ruled out the big-spending Premier League club making a sensational move for FC Barcelona superstar Lionel Messi at the end of the season, according to reports in the Daily Mail.

The mega-rich top-flight outfit have been linked with making a move for the Argentina international in recent weeks as rumours have begun to surface regarding the forward’s future in the north west.

However, speaking ahead of his side’s FA Cup quarter-final clash with Wigan Athletic on Sunday afternoon, the experienced Chilean trainer simply smiled when quizzed in the subject in his pre-match press conference, saying: “Just rumours”.

Messi has so far endured an injury-plagued season at Camp Nou, although the 26-year-old has still managed to record a highly impressive 27 goals and 13 assists in total in just his 30 matches in all competitions for the La Liga champions, including an equally eye-catching 15 strikes and nine assists in just his 19 league encounters.

But with a long-term contract with the La Liga giants that now runs until June 30 2018, the chances of City and Pellegrini being able to lure the player to the Premier League remain slim at best.