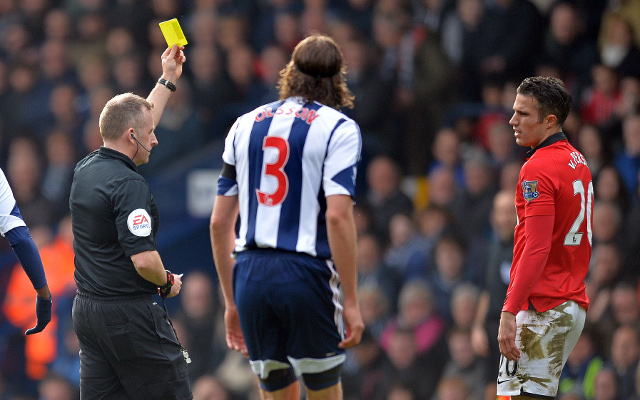 David Moyes said he substituted Robin van Persie for his own good during Manchester United’s 3-0 win at West Brom.

Van Persie set up Phil Jones for the opener at The Hawthorns, but the Dutchman’s afternoon was brought to a premature end in the 63rd minute after he had narrowly avoided being sent off.

Having been booked for a dangerous challenge on Morgan Amalfitano, the Dutchman launched himself into a sliding challenge that upended Steven Reid moments later, but referee Jonathan Moss elected not to show him a second yellow card.

Moyes promptly replaced the forward with Danny Welbeck, who went on to score United’s third goal after Wayne Rooney had made it 2-0 with a 65th-minute header but Van Persie did not look pleased as he left the field.

“I was,” Moyes told broadcaster BT Sport when asked if he was concerned about Van Persie being sent off (quotes via Yahoo).

“But I didn’t think the second tackle was a booking. I thought it was a foul. And we were always taking Robin off anyway.

“He played 90 minutes for Holland in mid-week and we’d got ourselves in front, so it made it an easy decision to make. I just felt I couldn’t take a chance in case Robin slipped or anything else which might have made the crowd get up against the referee.

“Overall, Robin played really well today, and so did Wayne. I was pleased with them.”