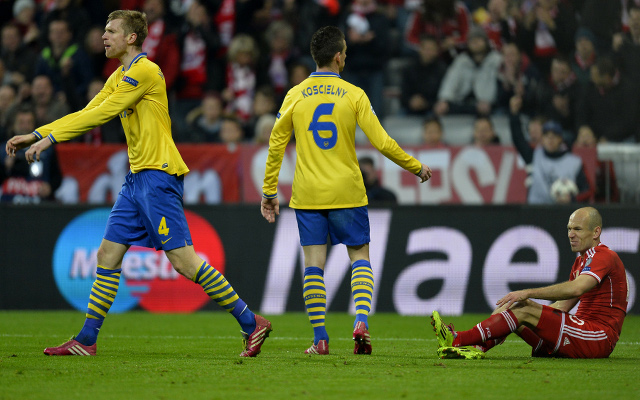 Dutchman won yet another penalty against the Gunners at the Allianz Arena.
Arsenal head coach Arsene Wenger has accused Bayern Munich wide man Arjen Robben of being a “diver” after the north London club were knocked out of the Uefa Champions League by the Bundesliga champions on Tuesday night, according to reports in the Daily Mirror.

The Netherlands international was once again at the centre of controversy at the Allianz Arena after going down in the penalty area following minimal contact from Arsenal’s Santi Cazorla.

And after the game, Wenger said: “Robben is very good at getting the maximum of nothing. He’s a great player and as well a very good diver but it’s part of him.

“He is a fantastic player, I would not deny that. He is one of the best players in the world. But he doesn’t need this.

“He gets in front of a player and then he slows down, he goes down. He gets the free kicks. If he gives him a yellow card on the first one when he goes down, he will not do it again.

“Our defending and our spirit was good. The frustration I had is that in the last 20 minutes I felt Bayern was very vulnerable defensively and that we didn’t take advantage of that.

“They are a good team, a great side with great players and they played well but we still have regrets over the two games.”