CaughtOffside understands that Old Trafford boss Moyes is ready to offload Robin Van Persie, who is said to have something of a frosty relationship with the Scottish manager, and will make Javier Hernandez available as he seeks to make room for a big money striker signing.

Cavani has proven a success in his debut season at Ligue 1 big spenders PSG but is said to be unsettled in the French capital, not overly impressed by the standard of football in the French top tier and perhaps of the belief that his side may have achieved as a much as they can on the European stage.

Indeed the former Napoli man may well not content to act as a second fiddle to Swedish international Zlatan Ibrahimovic, who is certainly the ‘senior’ partner in Laurent Blanc’s PSG attack. 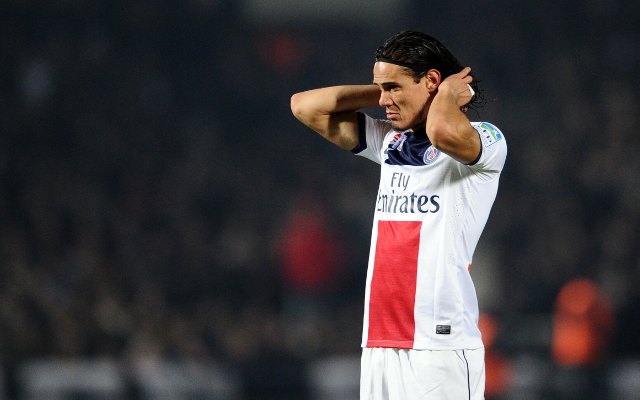 27 year old Uruguayan Cavani would be ideally suited to life in the overly physical confines of the English top tier and Moyes believes that the powerful forward could work well in tandem with Wayne Rooney.

Moyes is concerned about Van Persie’s attitude and fitness issues, which have led the Dutch international to experience a tough second season at Man United, following a hugely successful debut campaign during which he netted 30 goals in all competitions.

There is growing interest in the 30 year old forward and the feeling is that if Man United are offered a fee around the same level as the £24m they paid Arsenal for his services then Moyes is ready to sell Van Persie to make way for Cavani.

Prior to his move to the French capital Cavani scored an impressive 104 goals in 138 appearances in three seasons in Naples and has already racked up 21 goals this term for PSG.

Regardless of his push to sign Cavani the Man United manager is ready to sell Javier Hernandez, with the 25 year old becoming little more than a bit-part player under Moyes, the 25 year old Mexican having started just four Premier League fixtures and fallen behind Danny Welbeck in the club’s pecking order.

Man United’s board are willing to fund a massive bid for Cavani as they look to bring in a world-class summer signing as a statement of intent to help extinguish the memory of what has already proven a disastrous season, and one that will almost certainly lead to the club failing to secure a Champions League berth for the first time in the modern day era of the competition’s history.