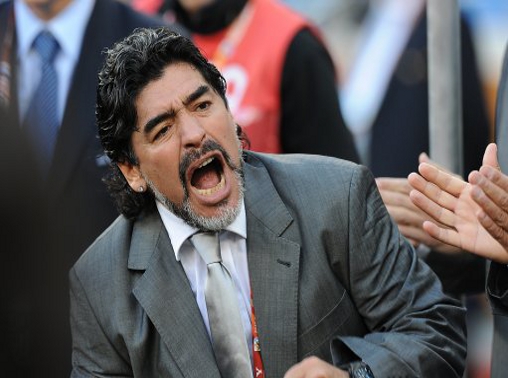 Reds’ display so impressive that even Diego was moved to clap.

Former Argentina and FC Barcelona legend Diego Maradona was in attendance at Old Trafford on Sunday afternoon as Liverpool beat Premier League champions Manchester United 3-0, with the one-time playmaker exhibiting an extraordinary pair of earrings, according to reports in the Daily Mail.

The Argentinian was given a seat in the Old Trafford’s directors’ box to watch the Merseyside giants run amok at the Theatre of Dreams, with visiting skipper Steven Gerrard managing to score a brace of spot kicks either side of the break ti help his team to a resounding win in the north west.

In fact, some of the football that Reds head coach Brendan Rodgers’s side produced against their arch enemy was so eye catching that Maradona himself was even moved to stand up at one point and applaud.

However, unfortunately for Diego, that only revealed his hilarious earrings for all to see ….