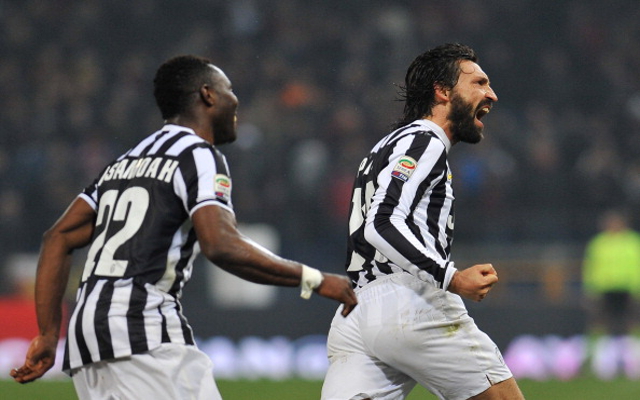 Pirlo’s brilliance sends Juve through to the next round.

All the latest headlines from the newspapers in Italy as Andrea Pirlo’s sublime free-kick sees Juventus advance in the Europa League at the expense of Fiorentina.

– Another masterpiece of a free kick drags Juve to the quarter-finals.

– There are few risks in the draw, like Benfica and Porto, so Bianconeri can target the Final.

– Vincenzo Montella: ‘Proud of my lads’.

– Napoli out, they have to bow down to Ricardo Quaresma.

– Peace between Della Valle and Agnelli, then chants on Heysel and ugly gestures.

– Rafa Benitez’s team dominates and wastes so much: Porto 2-2 and go through.

– Clarence Seedorf on a deadline. Rapport with Silvio Berlusconi hits the skids, dossier to get him fired.

– Mario Balotelli on the web: ‘I am a Milanista, but if they don’t want me…’

– Cesare Prandelli says yes to Antonio Cassano. ‘He is better than two years ago and everything has been clarified. Totti? His fitness levels will count’.

– Goran Pandev, goal straight away and then too many mistakes and wastefulness in front of goal. The 2-2 with Porto is fatal.

– Milan to sue 35 ultras! Threats after the defeat to Parma: do they have ties to crime?

– He left them purple-faced.

– Juve in the Europa League quarter-finals with a missile from the magician Pirlo.

– Bianconeri conquer Florence with no risks in defence and a terrifying free kick from the Azzurri star.

– Announcement of contract renewal is imminent.

– Napoli out, today there’s the draw and only Juve for us.

– Milan, everyone is at risk. Seedorf faces two decisive away games.

– Tachtsidis: ‘Toro, I regret my mistake’.