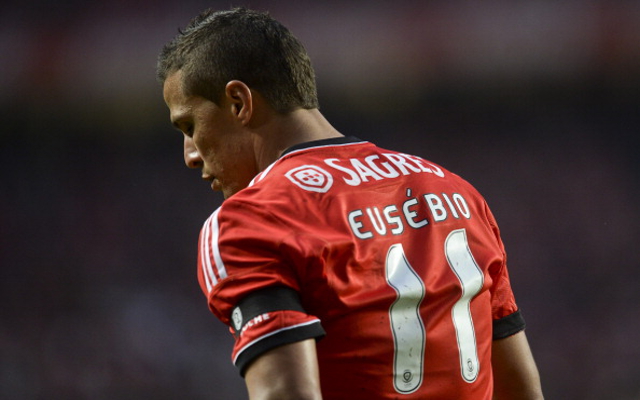 Striker spent a season on loan at Bolton Wanderers in 2010-11.

Benfica head coach Jorge Jesus has confirmed that Premier League giants Liverpool are interested in signing young Brazilian frontman Rodrigo for next season, according to reports in the Daily Mail.

The Reds have been heavily linked with former Spain Under-23 international in recent weeks, however, with Jesus now revealing as much after his side’s 2-2 draw with Tottenham Hotspur in the second leg of their Uefa Europa League tie in Lisbon on Thursday night that:  “It’s normal. Every Benfica player is in a big window.

“The league is full of high quality players so it’s normal for other clubs to be interested.

“Rodrigo is going through a good moment.”

However, the Merseysiders are now set to face stiff competition for the 23-year-old’s signature from the likes of Premier League rivals Manchester United, Chelsea and Sunderland who all had scouts at the Estadio da Luz on Thursday.

Meanwhile, the Brazilian-born player’s father and agent has also claimed that he will sit down with the Portuguese outfit at the end of the campaign to discuss the possibility of extending his son’s stay at Benfica.

“I expect to meet the club at the end of the season,” Adalberto Machado told TMW.

“We want the best for the player and for the club, but at the moment Rodrigo is only concentrating on Benfica and winning titles at the end of the season.”