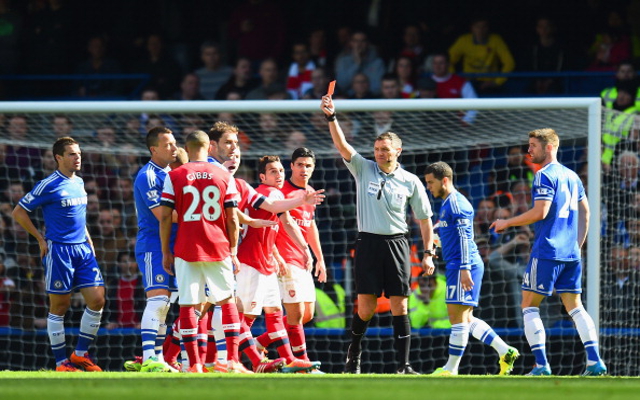 Neither Kieran Gibbs nor Alex Oxlade-Chamberlain will receive a ban following the wrongful decision made by Andre Marriner during Chelsea’s 6-0 win over Arsenal according to the BBC.

Marriner had mistakenly ordered off full-back Gibbs after Oxlade-Chamberlain had handled on the line, a mistake that came early on in the Premier League clash at Stamford Bridge on Saturday, albeit with Arsenal already 2-0 down following early goals from Samuel Eto’o and Andre Schurrle.

Though Oxlade-Chamberlain had indeed handled in the box the FA had deemed that had not prevented a goal as Eden Hazard’s effort was going wide of the target.

Both players are now free to play for Arsenal in their fixture against Swansea City on Tuesday night.

Andre Marriner will be back in action on Saturday as he officiates at St Mary’s for Southampton’s encounter with Newcastle United.