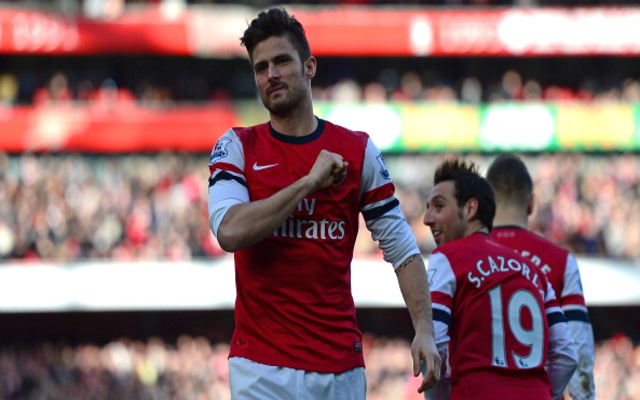 Juventus are said to be plotting a summer move for Arsenal forward Olivier Giroud according to Football Direct News.

The Turin side are set to offload forwards Mirko Vucinic and Fabio Quagliarella and may not elect to make Pablo Osvaldo’s loan move from Southampton a permanent one, perhaps offering boss Antonio Conte room for another striking option.

27 year old French international Giroud has had a few off field issues to deal with of late and the powerful forward has come in for some criticism of late though it’s worth noting that the former Montpellier man has looked exhausted since the turn of the year.

Arsene Wenger’s decision to not sign a fresh striking option in January was exacerbated by the long term injury suffered by Theo Walcott as well as the indifferent form shown by Lukas Podolski, the German scoring just three goals in 12 Premier League fixtures.

Some reports suggest that Giroud’s wife has demanded he moves back to France following tabloid allegations of infidelity though perhaps a move away from London to anywhere would be acceptable.

Giroud’s detractors would do well to note that the under-fire forward is Arsenal’s top scorer and only Mesut Ozil has provided more assists.

Arsene Wenger would be loathed to lose Giroud, who has scored a total of 18 goals in all competitions this season, unless of course the Gunners boss has earmarked a move for another potential first choice striking addition.

With regards to Juventus’s reported interest in Giroud one would have to wonder quite where he would fit into Conte’s plans given the two strikers he signed last summer, Carlos Tevez and Fernando Llorente, have both had excellent debut seasons in Italy, netting a combined total of 27 goals in 46 Serie A starts.