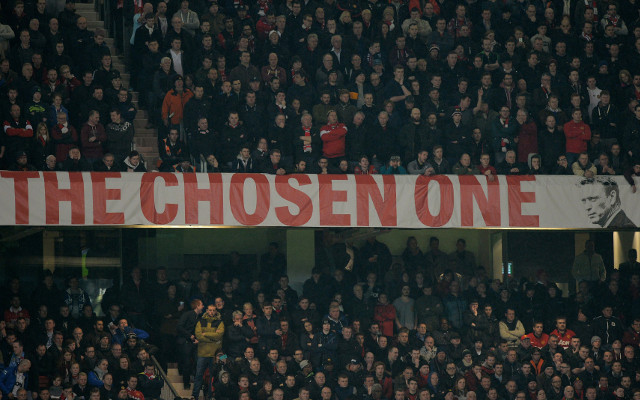 Manchester United fans are trying to organise a plane to fly anti-Moyes banner over Old Trafford. By @LukeEdwardsTele

The Manchester United mutiny is getting serious.

The ‘Chosen One’ banner at Old Trafford may still be in place but disgruntled Man United fans are reportedly planning to fly an anti-Moyes banner over the Theatre of Dreams, presumably during Saturday’s home match with Aston Villa.

The majority of United fans have been steadfast in their support of David Moyes throughout this calamitous season but the 3-0 home defeats to Liverpool and Manchester City appeared to have finally convinced the Old Trafford faithful that the Scot is out of his depth.

During Tuesday’s defeat to City, fans left the stadium in their droves before Yaya Toure had added a sublime third late on and some supporters turned on Moyes, and even his predecessor Sir Alex Ferguson – responsible for choosing the former Everton boss to replace him.

As City fans chanted his name, Moyes looked a broken man but a greater humiliation – an attack from United’s own supporters – appears to be just around the corner.