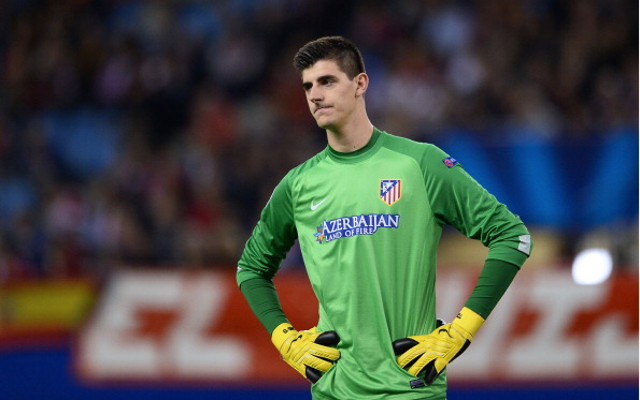 Belgian not interested in playing for Madrid’s ‘other’ side.

Chelsea goalkeeper has dropped a hint at where he may head, or in this case may not head, this summer by ruling himself out of a move to Real Madrid, according to the Metro.

Courtois is in the midst of his third straight season on loan with Atletico Madrid, during which time he has established himself as one of the top young goalkeepers in the world.

However, the 21-year-olds future remains in doubt as the Blues are still keen to keep hold of him, but he does not want to play second fiddle to Petr Cech.

He is due in London for talks in the near future, and though rumours continue to circulate he has been keen to distance himself for the links with Real Madrid.

“The talk about Real Madrid is only rumours, it is not true. The one thing I have always said is that it’s Atletico or Chelsea,” he said.

“I’m very happy to be with Atleti, my desire is to play and if I can’t do that at Chelsea and I can continue here, I’ll be very happy.

“I’ve never spoken with Mourinho. At the moment Chelsea cannot guarantee me a place in goal because [Petr] Cech is there, he is playing well and is one of the best keepers in the world.”