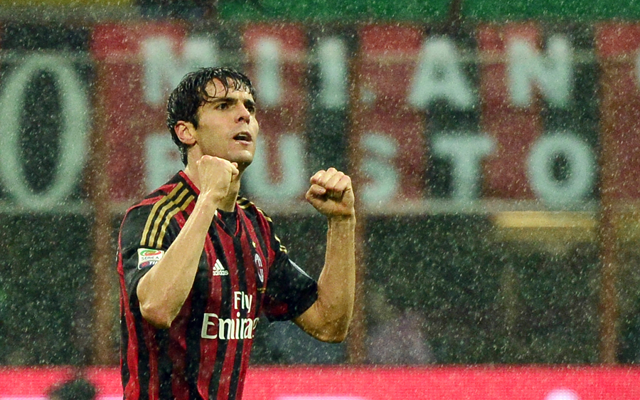 Clause in contract means he could leave without Champions League qualification.

All the latest headlines from the newspapers in Italy as AC Milan celebrate with Kaka as the Brazilian ace scores twice on his 300th appearance for the club.

– Milan’s Kaka party (but will he leave?)

– Splendid brace from the Brazilian on the day of his 300th game in a Rossoneri jersey. Adriano Galliani reveals: ‘He has a clause in his contract and could leave without Champions League qualification’,

– Carlos Tevez is out, so Gonzalo Higuain can stop Juve.

– Rafa Benitez has five reasons to hope in the big match.

– Erick Thohir and referees: ‘I don’t know whether to laugh or cry’.

– Edin Dzeko is the target.

– Unstoppable Atalanta, Europe is within reach.

– Politics and ultras: open to dialogue with summit set up in Rome.

– Mou’s Chelsea slip up. Liga: all the top teams soar.

– ‘I’ll bring video replays on to the field’. ‘I will ask the Federation to experiment in summer friendlies’.

– Thohir on the attack too: ‘Referees? I feel like laughing’.

– Easy 3-0 over Chievo, brace for the Brazilian.

– Bologna plummet, but Ballardini is confirmed.

– Napoli-Juve: Bianconeri challenge the cauldron of the San Paolo.

– From his anti-Juve barbs to Chelsea’s shock defeat with a John Terry own goal.

– Toro revenge against Cagliari to build a brighter future.

– Inter, Thohir puts everyone under review and criticises the referees.