Chelsea are ready to use PSG’s apparent interest in Blues star David Luiz to good use as they look to launch a stellar bid for Uruguayan international Edinson Cavani, the man Jose Mourinho wants to lead his Blues attack next season.

CaughtOffside understands that the Stamford Bridge boss is ready to offer Brazilian Luiz as well as £45m in a mammoth player plus cash offer they hope will be next to impossible for the Parc des Princes side to ignore.

PSG have stood firm on their desire to keep hold of 27 year old forward Cavani, who is said to be unsettled in the French capital, but may feel that an offer that not only hands then Luiz but also provides ample funds to bring in suitable striking support to star turn Zlatan Ibrahimovic is one they can happily consider.

Mourinho knows he needs a prolific forward next term having seen Fernando Torres, Demba Ba and Samuel Eto’o struggle for consistency, which has led to undue pressure on his creative midfield talent to shoulder the goal-scoring burden.

Whilst Belgian Eden Hazard has manfully delivered in this regard, netting 14 goals in Premier League action alone, the youngster has looked out of sorts of late, scoring just twice in his last dozen appearances which in turn has led Chelsea’s form to stutter, a stutter that could well lead to the West London side’s Premier League title challenge being derailed.

The lack of a striker who can score regularly has certainly been a real hindrance and there is no doubting Cavani’s pedigree and his ability to step into that role. 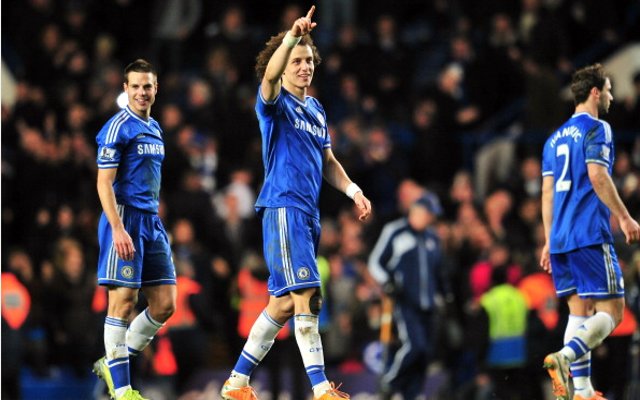 Despite not being at his very best the powerful marksman has still scored 21 goals in all competitions for PSG and prior to his move to the club he amassed an astonishing 104 goals in three seasons at Napoli.

Blanc apparently sees Luiz as a replacement for former Chelsea man Alex, who is set to leave PSG this summer and play alongside fellow countryman Thiago Silva at the heart of the club’s defence.

Luiz has started less than half of Chelsea’s Premier League fixtures this season and has more recently been used in a defensive midfield role and appears surplus to requirements under Jose Mourinho despite playing a pivotal role in the club’s Champions League and Europa League triumphs in recent seasons.