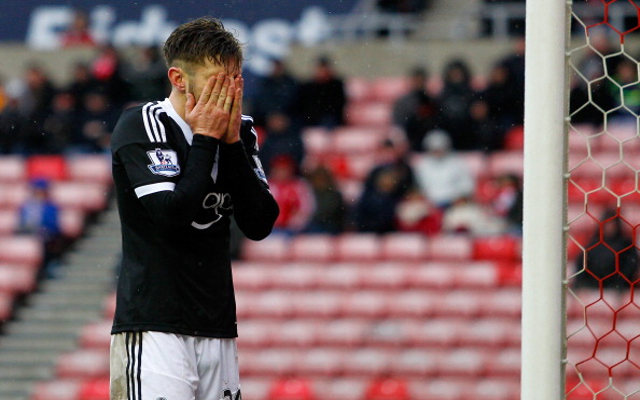 England international will “sit down in the summer and see what happens”.

Southampton midfielder Adam Lallana has hinted that he could leave St Mary’s this summer.

The 25-year-old, who has featured in all 36 of the Saints’ Premier League games so far this season, is reportedly wanted by Manchester United.

The Daily Mail claim that the Red Devils are willing to spend £55m to bring Lallana and Southampton teammate Luke Shaw to Old Trafford.

Lallana played 86 minutes as the Saints beat top-four hopefuls Everton 2-0 this afternoon thanks to first-half own goals from Antolin Alcaraz and Seamus Coleman.

Speaking after the match, Lallana told BBC Sport that he is enjoying life at the South Coast club, but that he will consider his options at the end of the season

He said: “Everton are fighting for a Champions League spot so to win 2-0 is a great result. I just want to enjoy my football. That’s when I am at my happiest.

“Playing in a youthful team like this, I feel like one of the experienced players. I am concentrating on the last two games and then I will sit down in the summer and see what happens.”

Southampton are poised to equal their best ever Premier League finish of eighth this season and Lallana believes that, if the club strengthen in the transfer market this summer, they can better that achievement next term.

He added: “We have top players, a top manager and a top team. If we can add to that in the transfer market and keep progressing I am sure we can compete [for European football].”

Lallana’s comments seem to suggest that Southampton may need to keep Pochettino in order to prevent their star midfielder from pursuing a big move.

Three-time England international Lallana is expected to be part of Roy Hodgson’s Three Lions squad for this summer’s World Cup, which starts in Brazil on June 12.