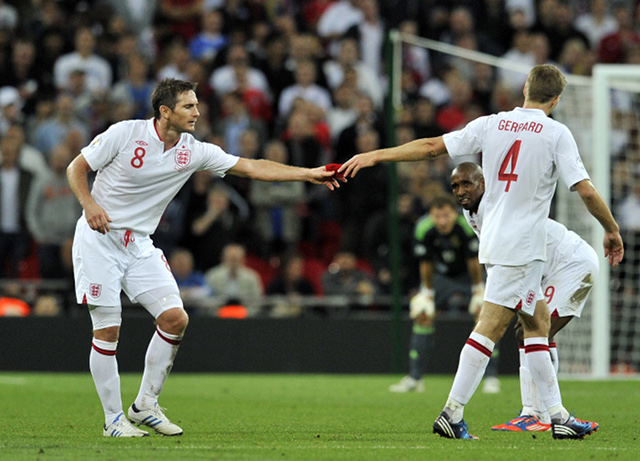 Lampard claims that Gerrard would be a worthy title-winning skipper, but insists that Chelsea hope to damage his Premier League dreams at Anfield today.

Chelsea midfielder Frank Lampard has said that Liverpool captain Steven Gerrard is a “great player” and that he deserves to win the Premier League.

Gerrard has won three League Cups, two FA Cups, one UEFA Cup and one Champions League during his 16-year playing career at Anfield.

However, the Reds have not been champions of England since 1990 – when Gerrard was just nine years old.

The Merseysiders look set to end their drought this season, though, as they sit top of the table and need just seven points from their final three matches to guarantee title success.

Their first of those three matches is against Chelsea at Anfield later today and, although Lampard has a lot of respect for Gerrard, the 35-year-old will be doing his utmost to damage his England teammate’s title dreams this afternoon.

“Stevie will go down as a great player no matter what,” The Mirror quotes Lampard as saying. “He has won pretty much ­everything there is going.

“He will be striving to win the league because that is the one little space in his trophy cabinet.”

Lampard added: “As a player he deserves that – but there is no sentiment from us. We want to win it.

“We respect the fact that Stevie is a great player, but I don’t think that he lives or dies on whether they win the title this year or not.”

Lampard, who joined Chelsea from West Ham United in 2001, has won the Premier League on three occasions – in 2005, 2006 and 2010. He has also won four FA Cups, two FA Cups on Champions League and one Europa League.

Gerrard is one of the greatest Premier League players that has never won the title. Click here to view Caughtoffside‘s list of 10 other stars that deserve to have lifted the trophy, but haven’t.