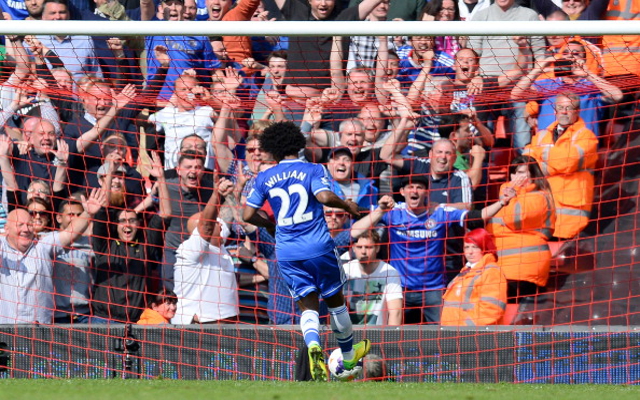 He did make changes – seven in total – but his unfamiliar lineup did one hell of a job at Anfield, ending the Reds’ 11-match winning run by securing a precious 2-0 victory courtesy of a goal in each period of stoppage time.

The 42-year-old was called upon to make eight saves in total, including a fine one-handed stop to keep out a fierce effort from Joe Allen. He also coped very well with Liverpool’s frequent attempts to unsettle him with high, hanging crosses.

The debutant did not look at all out of place in the Premier League, using his strength and intelligence to repel the Reds and keep Luis Suarez at bay.

Ivanovic excelled in his preferred position of centre-half and was the perfect partner for young Kalas.

‘Dave’ looked unflustered throughout and nullified the speed of Philippe Coutinho and Raheem Sterling with first-class positioning.

Despite a shaky start to the game, which saw him clatter Suarez and fortunately escape a booking, Cole grew into the match and ended up giving a typically solid 90-minute display. Don’t count him out of England’s World Cup plans.

His attacking threat was nullified by Mourinho’s rigid defensive formation. Defensively, he was a tad off the pace, which was highlighted by his awfully-late tackle on Sterling, for which he rightly got a yellow card.

The big Nigerian did very little wrong. He frequently dropped back alongside the centre-backs to reinforce ‘the parked bus’. Nearly all of his passes went backwards, but he retained possession well.

Of Chelsea’s central midfielder three, Matic was the main instigator of attacks. He was also used as the focal point of long throws, carrying out Mourinho’s detailed plan to the letter.

Schurrle failed to pressurise Glen Johnson on multiple occasions, giving the England full-back too much space, which, on another day, could have proved fatal.

Salah was unable to utilise his pace going forward and his over-reliance on his left foot made him predictable, giving Jon Flanagan a pretty easy job marking him.

Making just his fourth league start of the season, Ba showed good sharpness to pounce on Steven Gerrard’s slip and put his side 1-0 up against the run of play in first-half stoppage time. He also played out a bruising physical battle with Reds centre-back Mamadou Sakho.

The Brazilian injected a bit of much-needed energy into the Chelsea team when he replaced Salah on the hour. He worked tirelessly without the ball and capitalised on the extra space afforded to him by Liverpool’s late attacking desperation.

Cahill did his job for a quarter of an hour – nothing more, nothing less.

Returning to his former club, Torres resisted the urge to shoot for glory in the final seconds, instead passing to guarantee the goal for teammate Willian. This moment encapsulated the admirable team ethic of Mourinho’s men.