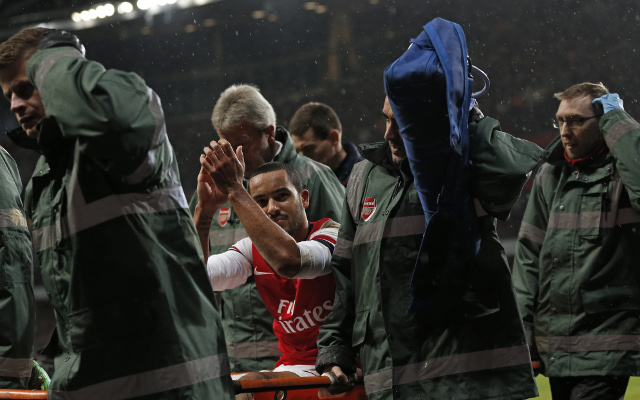 Arsenal have been rocked by the news that star forward Theo Walcott may miss the start of next season as he struggles to recover from the ruptured anterior cruciate ligament he suffered against Tottenham Hotspur back in January, the Metro reports.

The England international was stretchered off during the FA Cup clash in the new year and the injury ruled him out of contention from making it the this summer’s World Cup.

But Walcott has today revealed he may not even be fit for the start of next season, insisting he is in no rush to return to action.

“It’s nearly been four months now and my recovery has gone on track so far,” he said.

“I don’t see any point in being down in the dumps about the injury because it’s already happened and there are a lot of people with worse problems in the world. I’ll just get on with my work — I’m first in and last out on most days. I see the consultant soon, too, and hopefully he’ll give me the thumbs up to push on. I’d love to be running in a few weeks.

“I’m not pushing myself to be fit for the World Cup or anything like that. I want to be back quickly, of course, but safely, too. I want to try and be back for the early part of next season. That’s the goal so there will be a lot of hard work throughout the summer and during the World Cup.”