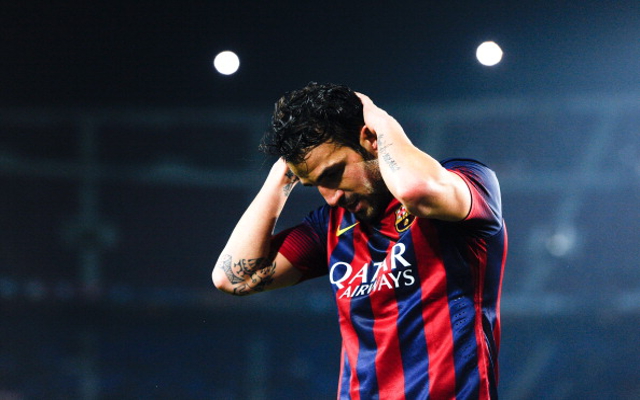 Emirates Stadium defender could be used as bait in deal to re-sign former Gunners skipper.

Arsenal boss Arsene Wenger is to make Barcelona star Cesc Fabregas his number one transfer target and is already believed to be in talks with the Nou Camp side over a possible deal to re-sign the former Gunners captain.

CaughtOffside understands that the 26 year old Spanish international is unsettled at Barcelona and could be ready to leave the Catalan side for a second time, not least as he’s become the subject of abuse from a section of his own supporters and a scapegoat for a fairly average campaign that looks set to end with the club securing no silverware.

Wenger had been looking to make a fresh offer for January target Julian Draxler but is now ready to switch his attention to Fabregas, who spent eight years at Arsenal prior to his £35m move back to Barcelona in August 2011.

Though Fabregas has started 26 La Liga fixtures this season he has also at times been dropped for crucial fixtures and repeatedly hauled off. Indeed of the midfielder’s 42 total starts this term the World Cup winner has been subbed on no less than 27 occasions.

Barcelona are set for a major squad shake-up and could be ready to allow Fabregas to leave and Wenger is ready to mount a £40m bid for his former charge and could well be ready to offer defender Thomas Vermaelen as bait in a combined deal.

The Belgian international is known to be a Barcelona target and is currently only used as a back-up to central defensive pair Laurent Koscielny and Per Mertesacker or as a left-back option if neither Kieran Gibbs or Nacho Monreal, and is therefore certainly a player Arsenal can afford to use as a makeweight.

Fabregas made 303 appearances for Arsenal during his first spell and Arsene Wenger hopes the chance to be a key figure in his first team set-up will persuade the Spaniard to consider a second stint at the Emirates Stadium club.