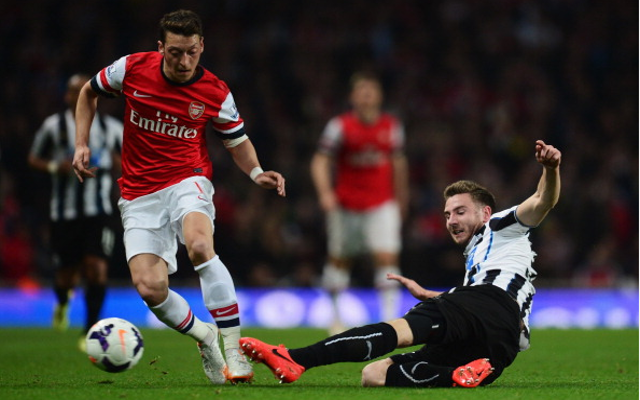 Nou Camp side make an offer that the Emirates Stadium side would surely turn down flat?

With their transfer ban having been suspended following a successful appeal Barcelona are looking to pull off something of a summer coup by luring club record signing Mesut Ozil back to La Liga according to French source Le10Sport.

The Nou Camp club appear keen to ring the changes at the end of the current campaign, which could well end with the Catalan giants clinching zero silverware, and are ready to offer Arsenal a big cash plus player swap deal for 25 year old German international Ozil.

The former Real Madrid playmaker has come in for a fair amount of criticism, some of which has been wildly unfair, after an average debut campaign at the Emirates Stadium and Barcelona may hope that his plays in their favour as they court the talented flair player.

Ozil has racked up seven goals and 14 assists in all competitions this term, which is a fair return in his first season in England, though perhaps more would be expected of a player that cost Arsenal £42.5m.

This source claims that Barcelona have two players in mind in relation to a combined cash plus player offer but the only individual named is adaptable attacker Pedro.

The Spanish international has been in and out of Gerardo Martino’s side this term but has still been incredibly effective but whilst Arsene Wenger would probably be happy to welcome in Pedro it’s virtually impossible to imagine he’d offload Mesut Ozil after just a year at the north London club.