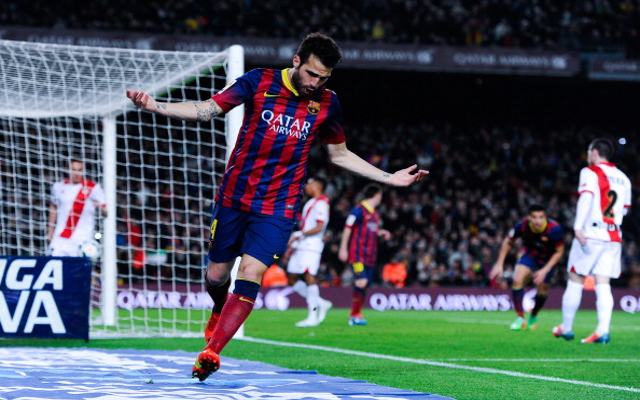 Former Gunners en route back to the Premier League.

Arsenal are said to be lining up a whopping £52m bid to bring former midfielders Cesc Fabregas and Alex Song back from Barcelona this summer in a bid to end their title hoodoo.

The Gunners have seen yet another title challenge slip away recently thanks to injuries to key men and a lack of activity in the transfer market, but Wenger is keen to remedy this by bringing two players that understand the culture of the club back.

CaughtOffside understands that Wenger is set to finally shell out a wedge of cash on the former stars after failing to replace them the first time around, and has been given hope of bringing them on board as they have both failed to establish themselves as key men within the side since they first joined the Catalan giants in 2011 and 2012 respectively.

Fabregas was tipped to leave the club last summer with Manchester united interested in taking him away from the Nou Camp, but he resisted the offer, only he is now said to be keen on making a return to the Emirates where he knows he will be a regular starter.

Song, similarly, is also interested on making a return to north London as he has been just a bit part player since linking up with the La Liga champions, and this season he has featured just 29 times in all competitions.

Both players will command a combined fee of £52m, which Barcelona will reinvest in the squad now that their transfer ban has been suspended.