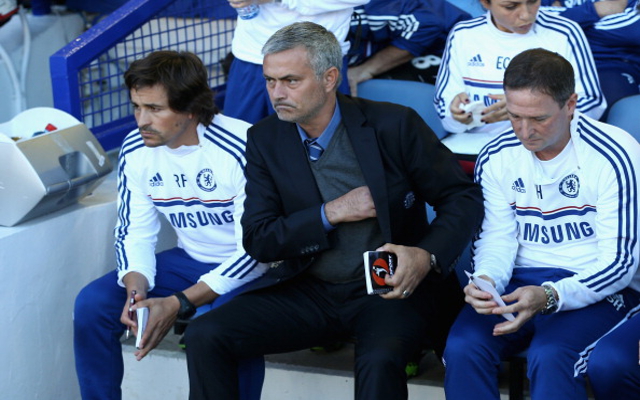 Jose Mourinho’s assistant manager at Chelsea has been hit with a six-match stadium ban by the Football Association.

Portuguese coach Rui Faria, 38, received the hefty punishment, along with a £30,000 fine, for his aggressive behaviour on the touchline during last month’s 2-1 defeat to Sunderland at Stamford Bridge.

Faria had to be restrained by Mourinho after confronting fourth official Phil Dowd and referee Mike Dean, who had just awarded a penalty to the Black Cats.

Fabio Borini converted the spot-kick to notch what turned out to be the winning goal in a match that saw Mourinho lose his 77-game unbeaten home record in the Premier League.

An FA statement read: “Following an Independent Regulatory Commission hearing, Chelsea coach Rui Faria has been given a six-match stadium ban with immediate effect, subject to any appeal, after he admitted two breaches of FA Rules.

“The first breach was that Faria used abusive and/or insulting words towards the fourth official during Chelsea’s game against Sunderland on 19 April 2014.

“The second breach was that his behaviour following the match referee’s request that he leave the technical area amounted to improper conduct.

“Faria, who requested a non-personal hearing, was also fined £30,000 and warned as to his future conduct.”

Faria is not the first coach to receive a stadium ban from the FA for a touchline misdemeanour this season.

Newcastle United manager Alan Pardew was hit with a three-match ground suspension as part of his punishment for head-butting Hull City midfielder David Meyler in March.

Former Blackpool boss Paul Ince was forced to miss five games last year, after misbehaving in the tunnel following a 2-1 win at Bournemouth.