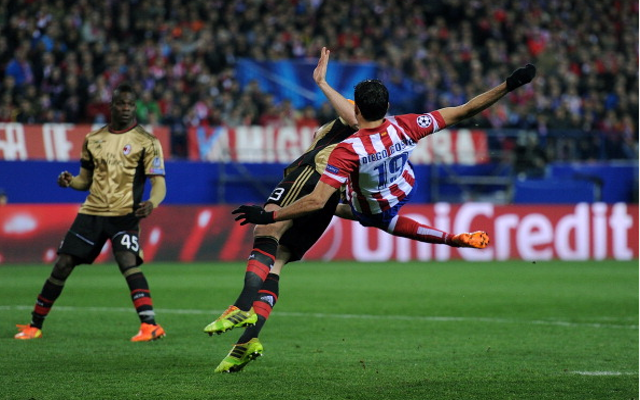 “We will see what happens,” says La Liga hotshot.

Check in to Levante UD vs Atletico Madrid

Atletico Madrid forward Diego Costa has claimed that multiple offers have been made for his services.

The Brazilian-born Spain international has been heavily linked with a summer switch to Chelsea.

Costa, who many reports claim is Jose Mourinho’s number one transfer target, scored a penalty against the Blues last night as Atletico won 3-1 at Stamford Bridge to book their place in the Champions League final.

He claims that is aware of the interest in him, but says that he is not yet thinking about the long-term future, as he is focused on achieving La Liga and European glory with Atletico this season.

“I feel good at Atletico, I am happy in Madrid,” Costa told Sky Sports Italia.

“We will see what happens, there are offers but it is too early yet to talk. Now I am just thinking about the end of the season, I want to win the Champions League and La Liga.”

Atletico are currently top of the La Liga table with three games left to play – a home match against Malaga, sandwiched either side of trips to Levante and Barcelona.

Six points from those three games will guarantee that club are crowned champions of Spain for the first time since 1996.

Atletico have never been champions of Europe, but that will change if they are able to beat city rivals Real Madrid in Lisbon on May 24.

Costa’s successful spot-kick against Chelsea saw him extend his tally for the season to 35 goals in 41 club appearances.