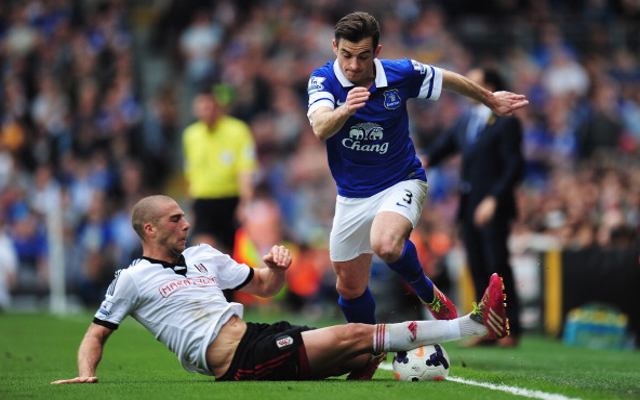 Englishman is now contracted to Goodison Park until 2019.

Everton left-back Leighton Baines has spoken for the first time about his “stressful” summer last year when Premier League champions Manchester United tried to lure the player to Old Trafford, according to reports in the Daily Mail.

The highly rated England international was the subject of numerous attempts to land him by his former head coach from Goodison Park, David Moyes, after the Scot had left the Toffees to take over from Sir Alex Ferguson at the Theatre of Dreams at the end of the previous campaign.

However, despite the Red Devils lodging several bids with the Merseyside giants for the 29-year-old throughout last summer’s transfer window, including a last-gasp offer in transfer deadline day in September, Everton refused to allow their star man to leave the club.

And now Baines himself has revealed that he left the final decision as to where he would be playing this season up to the club.

“I guess you never know if you’re doing the right thing or not but at the time, it’s not your decision as a player to make those calls,” said Baines. “I wanted to be kept informed. I spoke to the manager privately on numerous occasions, I spoke with the chairman.

“It was a bit of a stressful time because you’re not sure what way it’s going to go. You just try to conduct yourself in the proper manner as much as you can. I had those conversations myself. I didn’t have someone in there for me feeding back.

“I spoke with the manager, the chairman and we had private conversations. They kept me in the loop all along. From this end you might get credit for turning someone down that you probably don’t deserve because you didn’t, I sat on the fence and saw how the thing played out.

“If I was playing for a foreign club I may have acted differently but I think there is a different level of respect. Maybe it was just how I was brought up.”

Baines has so far managed to register five goals and three assists in total in his 30 Premier League outings for Everton this season.