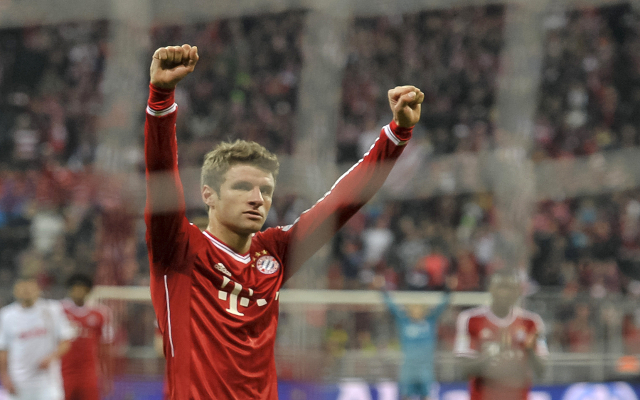 Old Trafford side look to bring in Allianz Arena attacker.

Man United’s push to sign Bayern Munich forward Thomas Muller appears to have been given a real boost with the German international said to have stated his desire to move to Old Trafford according to reports in the Metro.

Incoming Old Trafford boss Louis van Gaal apparently wants to bring in the 24 year old Allianz Arena star as one of his first captures as Man United boss and Muller wants to reunite with his former manager tis summer.

It was during van Gaal’s tenure at the Bundesliga club that Muller rose to prominence, helping the Dutch boss to secure a domestic title in his first season in charge of the Bavarian outfit.

Muller is apparently not happy with his role under Pep Guardiola with 11 of his 46 appearances coming from the bench, with the lanky attacker being left out of Bayern Munich’s starting eleven for crucial fixtures against Real Madrid and Arsenal.

Indeed of the 35 matches Muller has started this season he has been hauled off no less than 15 occasions.

On the general subject of unhappy players chief executive Karl-Heinz Rummenige has been quoted as saying:

‘If a player does not feel comfortable with Bayern Munich, he must come to my office. Then you have to talk about it.’

This may lead to some stars taking Rummenige up on his offer.

Louis van Gaal is set to be handed £150 to invest in the Man United squad and is ready to stump up the £35m needed to land Muller.

The Bayern Munich star is vastly experienced with over 250 appearances for the German giants and 47 caps to his name and a capture of such a big-name signing would certainly act as something of a statement of intent by the Premier League side.