Emirates Stadium side to reverse trend of selling stars to Catalan side by plotting big money La Liga raid.

Arsenal boss Arsene Wenger is ready to make his move for a trio of Barcelona talents who could well set for Nou Camp exits this summer.

CaughtOffside understands that the Catalan giants will conduct a major squad and managerial re-shuffle at the end of a campaign that is likely to end with Barcelona collecting no silverware for the first time since 2007/08.

Whilst Arsenal have routinely sold top talents to the La Liga side Wenger is looking to reverse the trend by making offers for three players he feels could help his Gunners outfit mount a genuine Premier League title challenge next season.

Wenger had been ready to re-ignite his interest in young Schalke midfielder Julian Draxler as he seeks to bring in more creative talents to give his Arsenal side a more direct attack minded approach but will now register a £35m offer for former captain Cesc Fabregas.

Arsene Wenger retains a good relationship with the 27 year old Spanish international and has been given encouragement by the player’s representatives to make an offer.

Though Fabregas has been a regular in Gerardo Martino’s first team set-up he has occasionally been dropped for key encounters and has become the victim of some abuse from his own club’s supporters, seen by some as the scapegoat for the Barcelona’s faltering efforts this term.

The signs are that Fabregas is beginning to despair at his limited role and it’s worth noting that out of 42 matches he has started this season he has been hauled off on an amazing 27 occasions and Barcelona are open to selling the World Cup winner.

In an effort to strengthen his attack, whilst also adhering to his youthful transfer policy, Arsene Wenger will also make an offer for Barcelona forward Cristian Tello.

Having chased Real Madrid’s Alvaro Morata for the best part of six months Wenger will now switch his attention to Tello, with a £15m bid likely to convince Barcelona to cash-in.

Tello is considered one of the hottest prospects in European football but the 22 year old has failed to force his way past the likes of Pedro, Alexis Sanchez and Neymar for a supporting role alongside Lionel Messi.

The fact that the young Spanish international can play either out wide or in a central striking role appeals to Wenger. 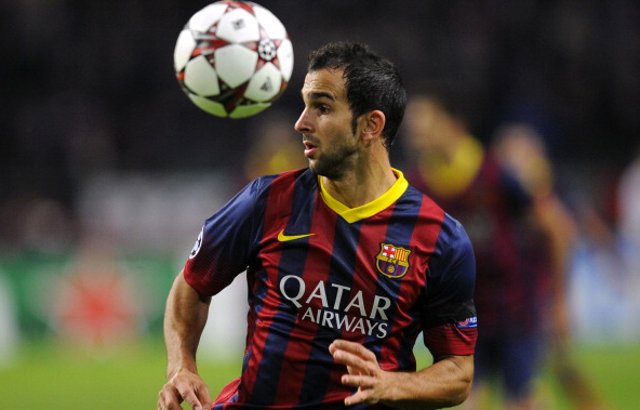 Finally Wenger will register a £10m bid for Spanish right-back Martin Montoya, who he will look to bring in to replace exit bound Frenchman Bacary Sagna.

Montoya is another player who has failed to secure regular first team action at Barcelona but is a player with undoubted talent.

Though never a regular in the Nou Camp starting eleven the 23 year old has made 55 appearances for Barcelona and has not looked out of his depth.

Wenger will retain the services of Carl Jenkinson with the England man fighting Montoya for the first team spot at right-back in a similar manner to which Nacho Monreal and Kieran Gibbs battle it out on the left.