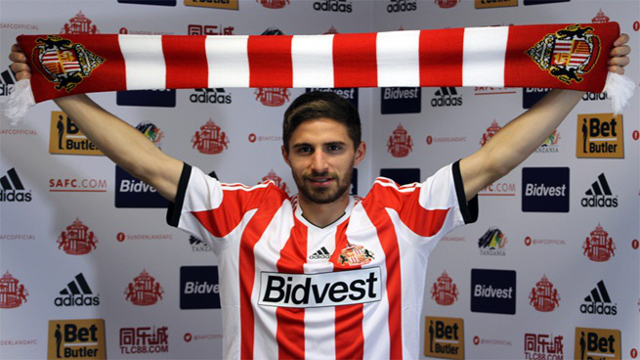 Reds striker says he has loved his time at the Stadium of Light, but insists Liverpool will decide his future.

Liverpool forward Fabio Borini has hinted that he could return to Sunderland next season.

The 23-year-old joined the Reds from Roma for an eight-figure transfer fee in July 2012, but he made just five Premier League starts during his first year on Merseyside.

Last summer, he moved to Sunderland on a season-long loan and has so far netted nine times in all competitions for the Black Cats.

Borini seems to stand little chance of challenging Luis Suarez and Daniel Sturridge for a regular starting berth at Anfield, with the in-form pair having scored 52 league goals between them this term.

However, with the Reds due to compete in the Champions League for the first time in five seasons, the Italian frontman could be required to perform a role in the squad.

He admits that any decision on his future rests in the hands of Liverpool, but he has refused to rule out extending his association with the Stadium of Light outfit.

“Anything is possible,” the Daily Star quote Borini as saying. “It depends on what Liverpool say.

“They will need a bigger squad because you can’t play in four competitions with the same 11 players.  But I’ve enjoyed every second here.

“It’s been great from the fans, the city and everyone at Sunderland, the love and friendship that they have given me throughout the season has been incredible.”

Borini, who has been capped once by Italy at senior international level, began his career in England with Chelsea.

He left Stamford Bridge in June 2011, having made just one start for the Blues, although he did impress during a brief loan spell at Swansea City, for whom he six goals in nine league games.

Borini has three years remaining on his current Liverpool contract.