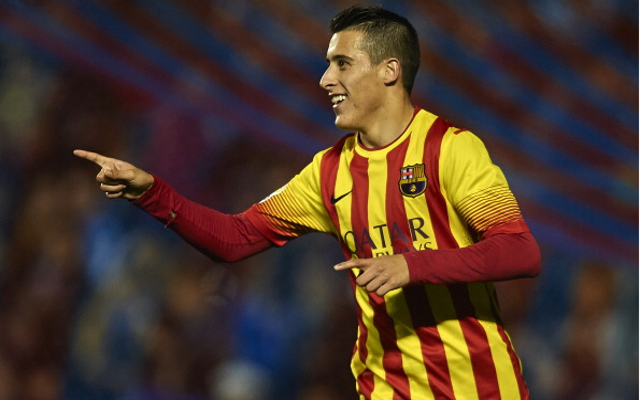 Spaniard has netted just once in the league all campaign long.

Liverpool are said to be confident of beating both Arsenal and Paris Saint-Germain to the signature of exciting FC Barcelona midfielder Cristian Tello at the end of the season, according to reports in the Metro.

The highly rated young Spain international is currently one of the most sought-after attacking starlets plying their trade on the Continent, although it had been widely assumed that Tello would remain with the La Liga champions to keep developing his career.

However, despite having been handed firm guarantees by the Catalan giants at the end of the previous campaign regarding his role in the first team in this campaign under the new Barca head coach Tata Martino, those promises have not been met, meaning that Tello has now finally lost patience with the club and decided to seek a new challenge in his career in an overseas league this summer.

As a result the 22-year-old, who agreed to put pen to paper on a new contract last year that runs until June 2018 on the basis that he would be given a more prominent role to play in the Barcelona starting lineup, has so far managed to feature in just 29 matches in all competitions this season.

And now Reds boss Brendan Rodgers is hoping to be able to take advantage of Tello’s unhappiness in Catalonia by luring the player to Anfield in a deal worth just £8m.