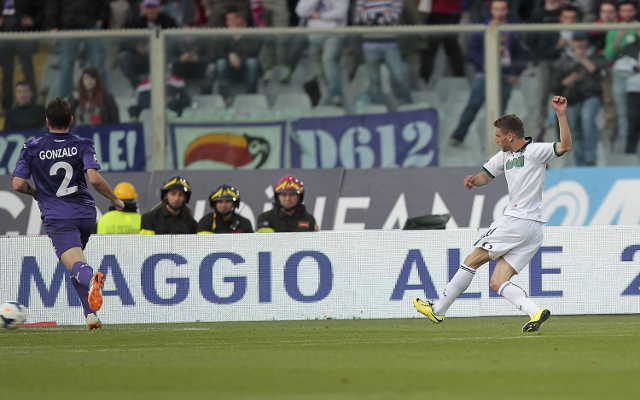 Chelsea have made loaned out Juventus forward Domenico Berardi their top summer transfer target according to Football Direct News.

Such is Jose Mourinho’s desire to land the teenage Italian ace that the Blues boss is ready to offer flop Fernando Torres as well as a ‘hefty’ cash sum in exchange for the in-form marksman.

Berardi has been a huge success out on loan at Serie A minnows Sassuolo, scoring 16 goals in 24 starts for the newly promoted side, including an eye catching four goal haul against AC Milan that put him firmly on the footballing map back in January.

If Antonio Conte doesn’t feel Berardi worthy of ushering into his Juventus fold then he may well be interested in ways to cash-in on his services but a move that would see Torres join the Turin side seems unlikely to tempt the Serie A title holders.

Conte would do well to keep hold of Berardi as he is clearly very much one for the future who could very well challenge the likes of Fernando Llorente and Carlos Tevez next term.

Mourinho certainly needs fresh striking options and the likes of Torres, Demba Ba and Samuel Eto’o may well all be set to leave Stamford Bridge and the Chelsea manager may then be forced to consider using Romelu Lukaku, who has of course had two excellent loan campaigns at West Brom and Everton under his belt.