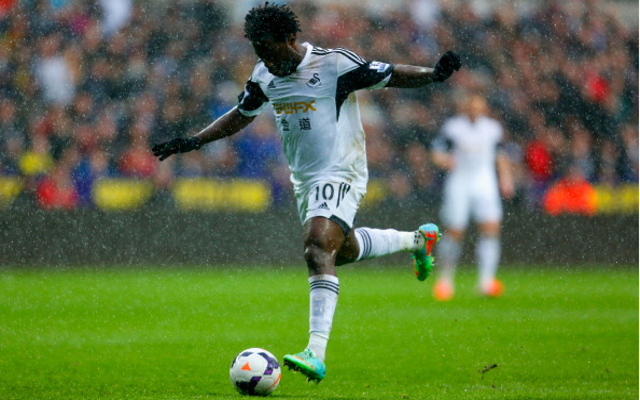 Liberty Stadium side will ask for huge fee for Gunners target.

Swansea City are seemingly well aware of growing interest in Ivory Coast international Wilfried Bony but will demand a massive sum for his services if any prospective buyer stumps up an offer this summer according to talkSPORT.

Bony has scored 25 goals in all competitions this term and the Liberty Stadium side are in no mood to consider bargain bids for a player who cost them a club record £12m last summer with manager Garry Monk stating;

“It would have to be an astronomical fee for him to leave though and we’re not a selling club. We’re not in any debt. We don’t need to lose anyone so we’re in a strong position.”

“He’s not the sort of player to take it easy. Every single day he pushes himself and everyone around him. The more players you have in your squad, the better you’re going to be.”

Arsenal are said to be very keen on bringing in the powerful marksman as Arsene Wenger seeks to bring in some much needed striking reinforcements.

The Gunners were left overly reliant on Olivier Giroud as their central striking weapon with Theo Walcott being out with a long term injury for much of the current campaign and Lukas Podolski being more often used in a wide attacking role.