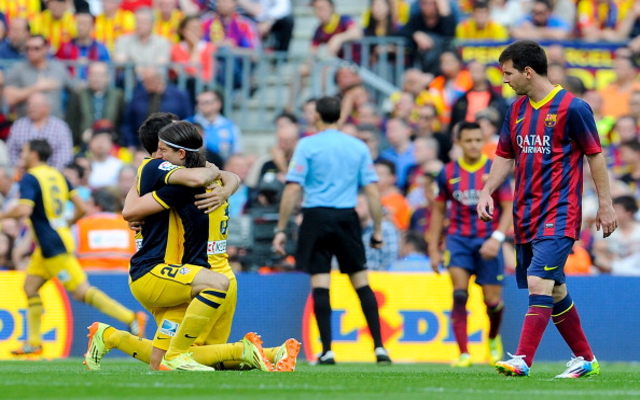 Despite injuries, Atleti fight back to seal draw at Barca to secure league title.

All the latest headlines from the newspapers in Spain as they are dominated with praise for the Atletico Madrid who clinched the La Liga title on Saturday.

– Ole, ole ole, you are Champions!
– Brilliant yet agonising, a colossal Atletico win La Liga.
– Barca went ahead 1-0. Diego Costa and Arda went off injured.
– Diego Godin scored with a header to level matters.
– El Cholo gives Los Rojiblancos their tenth league title.
– A triumph borne from effort, pure Atletico use up every bit of courage and heart.
– Arda and Costa rally the team in the break: “You have to win for us”.
– Simeone was exultant: “I was sure that Luis was helping our boys defend”.
– “Cristiano Ronaldo and Karim Benzema to go to Lisbon”.
– The Portuguese could not play and the Frenchman had to retire early but Carlo Ancelotti is taking both to the final.

Image courtesy of AS.com.
– ‘What a way to win!’
– Atleti secure league title with 1-1 draw at Camp Nou as Godin scores powerful header to level matters.
– Widespread praise for Simeone and his side, brought together to defeat the dominance of Barcelona and Real Madrid.

Image courtesy of Mundo Deportivo.
– Applause to the champion.
– Atleti secured their tenth title and Camp Nou gave them a sporting ovation.
– Alexis put Barca ahead but the equaliser only broke Azulgrana hearts.
– A bitter sweet ending for Los Blancos and Blanquiazules.
– Nadal and Djokovic in the final in Rome.
More Stories Atletico Madrid CF FC Barcelona Real Madrid CF