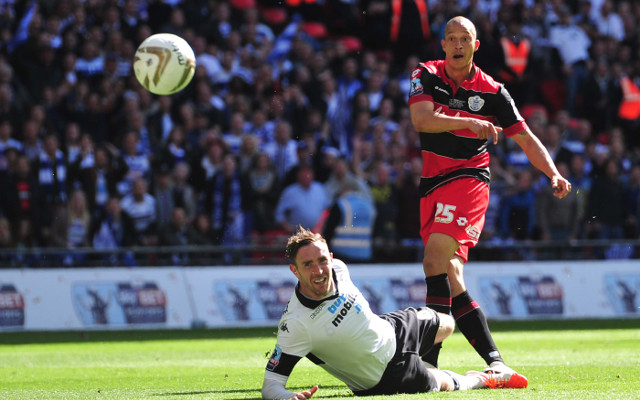 10-man QPR down Derby with a last-minute winner in the Championship playoff final.

Queens Park Rangers have been promoted to the Premier League after beating Derby County 1-0 at Wembley Stadium.

Harry Redknapp’s QPR had to play for a third of the Championship playoff final with 10 men, after midfielder Gary O’Neil was sent off for a professional foul on Johnny Russell on the hour.

The Hoops, who finished one place and five points behind Derby in the league table, battled hard despite their numerical disadvantage.

Substitute Bobby Zamora scored the winning goal in the final minute of normal time with his side’s only shot on target.

Junior Hoilett did brilliantly to dig out a cross from the right and, after Richard Keogh had made a mess of his attempted clearance, the ball fell to Zamora, who finished clinically with his left foot from 12 yards.

Check out winning goal below.

Zamora has now scored the winning goal in two Championship playoff finals, having given West Ham United a 1-0 victory over Preston North End in 2005.