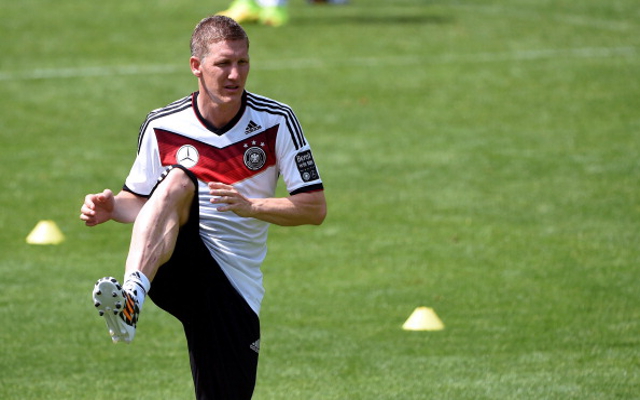 Incoming Man United boss Louis van Gaal will bring an end to the club’s pursuit of long term targets Toni Kroos and Cesc Fabregas and will instead look to bring in Bayern Munich star Bastian Schweinsteiger who the Daily Mail claims could be available for as little as £10m.

The 29 year old is apparently open to the idea of an Allianz Arena and has of course worked with van Gaal at the Bavarian club and may well be tempted by a move to the Old Trafford side.

Bayern Munich manager Pep Guardiola is ready to sell Schweinsteiger as he has a host of midfield options in his armoury and is ready to make the long term servant available.

Schweinsteiger has represented Bayern Munich since the age of 14 and has just completed his 12th season in the club’s first team set-up, racking up 473 appearances for the club during which time he has won a host of honours including seven Bundesliga titles and a Champions League triumph.

Man United could well do with extra quality in the centre of the park with the likes of Marouane Fellaini, Tom Cleverley, Darren Fletcher and Michael Carrick all fighting for their futures under Louis van Gaal.

Such a move would be massive statement of intent and would go some way to restoring the club’s reputation, which took a real knock during David Moyes’s ten month reign in charge.