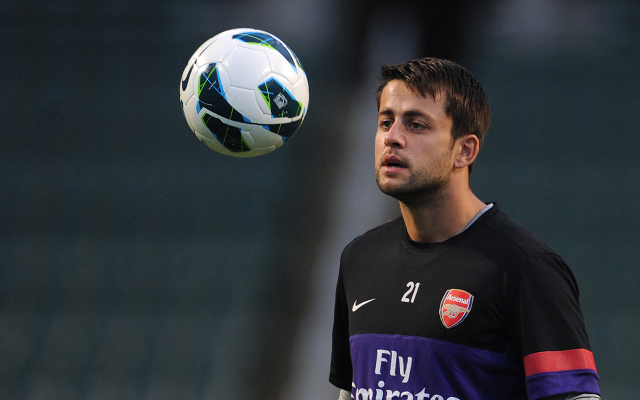 The South Wales club are reportedly preparing for life without Vorm, who has been linked with Liverpool.

Arsenal goalkeeper Lukasz Fabianski is a summer transfer target for Swansea City, according to the Daily Star.

The 29-year-old Poland international has been at Arsenal since May 2007 when he joined the Gunners from Legia Warsaw.

However, he has made just 31 Premier League starts for the North London club, having been kept out of the first-team by Manuel Almunia and then Wojciech Szczesny.

Fabianski ended his Arsenal career on a high. He played every minute of the club’s FA Cup campaign this season, including the final, in which the Gunners beat Hull City 3-2 after extra time.

His current contract is due to expire next month, when he will become a free agent.

Swansea are apparently ready to pounce, as they look to secure a replacement for Dutch stopper Michel Vorm, who has been linked with a move to Liverpool.

The Reds, who finished second in the Premier League this season, are reportedly keen to sign Vorm as back-up for current number one Simon Mignolet.

Liverpool boss Brendan Rodgers is said to be hopeful of bagging Vorm for a modest transfer fee of £5m.